The CPS Test is a free click per second test, which measures your mouse clicking speed in given time frame. Playing the CPS test game is easy and fun at the same time. The game is suitable for all age groups, so don't worry if you are just a high school student or a person with a corporate job.
​
Have you wondered how many mouse clicks can you accomplish in thirty seconds? Well, many might not even know if there is a way to calculate such an atypical activity. It might come as a surprise that not only there is a way to calculate the number of clicks per given timeframe but also many users play the game and compete globally.

Generally, calculating mouse clicks is referred to as ‘click speed test’’. Our website offers many variations by which a user can test his mouse clicking ability. The click speed test is more like a pass time game where players try to score the highest score. Below there are simple steps one needs to follow:-

The CPS Test is a way to measure the number of clicks in per second. CPS is just the magnitude of clicks to a time unit; in this case, seconds. It merely means that the higher the rate of clicks per second the better the score.
While the game is set to default time of 5 seconds, players can switch to other time variations from the menu on top of the page. Available options to test click speed include - click per second, click per 10 seconds, click per 60 seconds (1 minute), and the highest being click per 100 seconds. 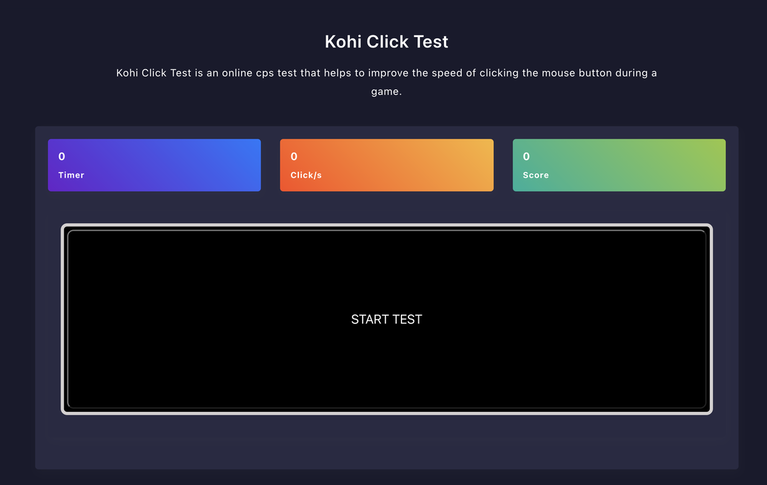 Kohi click test is a method to determine the ratio of clicks per second. It is similar to other click test programs, with the only significant difference being that it is featured on a Minecraft server known as Kohi.

The Kohi server is popular for Hard Core Factions game modes. While Kohi is an offshoot of MineHG, the latter is a spin-off of Minecraft PVP (MCPVP). Now, Brawl Games own the MCPVP but was initially developed by 'hclewk.'

Why Clicking Speed Is Essential?In most case, gamers are more concerned about the pace at which they can click the mouse as it enables them to amplify their performance. Players are required to have quick finger movements to perform better in Minecraft.

Data from independent forums indicate that players with 6-7 click per second is good. Some state that when fighting in Minecraft PvP Combat, players must be able to swing their swords at least ten times in a second that translates to 10 clicks per second. The faster the clicking, the more chances that a player can hit the enemy.

Meanwhile, people claim that clicking speed does matter, but at the same time, it has to be accurate. 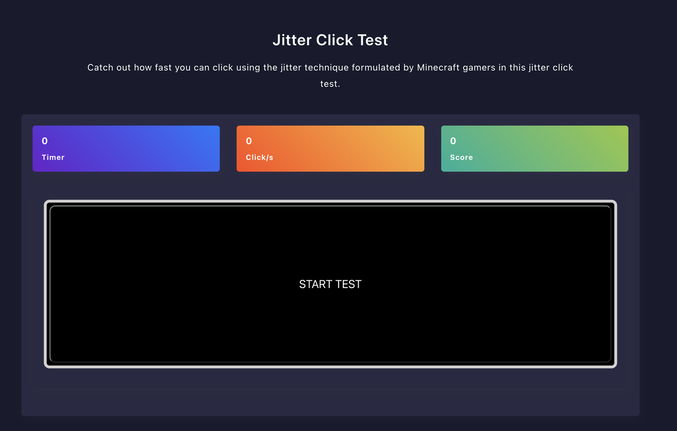 Jitter clicking is a technique that allows gamers to click the mouse quickly than regular clicking. The method is commonly leveraged for games that require a quick burst of clicks over a short period.

Generally, Gamers practice the art of Jitter clicks for games that demand fast clicks such as Minecraft and Farmville. However, the demand has led to the rise of a new form of the game known as 'clicker games', whereby the games test the clicking speed of a player. Over time, the market for these games has grown considerably, making it a competitive digital sport.

Globally, players compete to become the fastest clicker over a given period. The rise in interest for such clicking games have led to the release of various iterations of the game such as click per second, click per 5 seconds, click per minute etc.
​
The level of appeal towards such games is such that many have set world records leveraging various mouse striking techniques such as Jitter Clicking.

How to Jitter ClickTo Jitter Click, gamers strain their arm muscles to generate and transmit vibrations to the fingers that lead to a quick burst of mouse clicks. Players must note that the technique is not easy to master and requires practice.
\
To avoid injury, one must initially focus on hand spasm for a short period, such as a few seconds. The technique is all about controlling the hand vibrations. With continued practice, players will build stamina to go for longer clicking intervals.

At first, it's difficult to aim at a particular spot and click, but with time, players will master the clicking and can make more clicks per second. After a player has become proficient, then the jerking of hand is not even visible.

Jitter Click alternativeApart from Jitter Clicking, there are various other techniques to increase ones clicking speed. Some of the conventional methods include Butterfly Clicking and Drag Clicking.

Butterfly clicking is a method of generating rapid finger spasms. In the technique, a player uses two fingers to alternatively strike the mouse in a bid to achieve more clicks over a given time frame.

The method is very efficient as the two-finger provides more control to achieve a higher number of clicks. However, at the same time, Butterfly Clicking is controversial. As mentioned above that clicking speed test has become a game in itself; many competitions do not consider scores obtained by leveraging the butterfly method. Also, many servers ban this style of mouse striking. Leveraging can score close to 2-25 clicks per second.